No one at this facility talks directly to any pilots. Instead, the facility is designed to ensure that the NAS runs as smoothly as possible, day in and day out, by creating action plans for whatever could slow air traffic down. With severe weather, space launches, military activity, VIP movements and staffing constraints all complicating the smooth operation of the nation's airspace, managers and industry stakeholders work together to ensure everyone gets on their way as quickly and safely as possible.

"You have to have somebody who sees the big picture," command center staff manager Joe Dotterer told TPG during a September visit.

The current command center is actually the facility's third iteration. The original command center opened at FAA headquarters in the southwest quadrant of Washington, D.C., in 1970. It was then relocated to Herndon, Virginia, in 1994. It was from the Herndon facility where, on Sept. 11, 2001, the order was famously given to ground all civilian aircraft flying over the U.S.

If there is one word to sum up what happens at the command center, it would be "collaboration."

"We decide as a group what we're doing," said Chris Citrola, a national traffic management officer.

The heart of the command center's collaborative efforts is the planning teleconference. That large call, held every two hours from 7:15 a.m. to 9:15 p.m., sees representatives of major air traffic facilities, airlines and others dial in to discuss how to handle airspace constraints.

On the day of TPG's visit, the NAS was relatively quiet, though there were the usual issues to sort through. A computer malfunction had led to Alaska Airlines calling for a ground stop of its flights — something the FAA will do when a carrier requests it — and Hurricane Fiona had just struck Puerto Rico, affecting agency-managed airspace in the Caribbean. Weather in Boston was also expected to cause issues later that day, and it was determined that another call would be held to develop an action plan for that.

At its core, the command center manages scarcity. There are only so many runways available at major airports in the U.S. on even the best weather days. Add low-visibility weather or some other situation — for example, a presidential "movement" that requires flight traffic to stop at an airport — and that scarce resource becomes scarcer. Aircraft must be spaced out more, and the whole system slows down — or, as a last resort, stops. A similar situation plays out at higher altitudes when a large storm affects the number of routes that an air traffic controller has for his or her aircraft.

When there is weather — or any other sort of situation that would reduce the number of acceptable arrivals — managers work with airlines and others to determine what sort of tools they will use to slow traffic down. They also have to decide to what extent traffic should slow down, which is known as the "rate."

"The rates are always the contention," Citrola said, underscoring the tension between the different stakeholders at the command center that can sometimes arise.

Some of the tools — known as traffic management initiatives and sometimes referred to as "programs" — can be invisible to passengers and are the first choice of command center staff. Flights can be slowed en route to the airport or rerouted around weather to reduce the arrival rate at the airport. While passengers might make it to the gate a few minutes late, the overall disruption is minimal.

Then, there are more disruptive solutions, such as a "ground delay" program. That's when traffic to an affected airport is held on the ground at its departure airport and not allowed to leave until a specified time. A computer will assign these times in order to achieve the desired arrival rate. Then there's the aforementioned "ground stop," when flights to the affected airport are held on the ground at their origin airports; they don't receive new departure times until the stop lifts. Ground stops are generally short-lived and become ground delay programs.

The command center staff always prefers something less disruptive if possible, Dotterer said. No one likes it when people are forced to sit through a two-hour ground delay, he noted.

Space: A challenge for air traffic

When a rocket is launched — from Cape Canaveral, Vandenberg Space Force Base in California or elsewhere — airspace must close for safety reasons. The command center coordinates those airspace closures and determines where, exactly, the closure will be. Those who manage space efforts work directly upstairs from the main room of the command center in a room called the Challenger Room; it's dedicated to the seven astronauts who perished aboard the space shuttle in 1986.

Inside the Challenger Room, which opened in 2018 as regular space missions were ramping up, are two rows of desks where staff monitors air traffic and rockets in real-time during a launch. The Challenger room has been through a recent audio visual upgrade to accomodate new AV switching & control technology.

"To say this is a special room is an understatement," said Duane Freer, space operations manager at the FAA's Air Traffic Organization.

The big innovation is the FAA's Space Data Integrator — a tool that arrived last year and allows the FAA to receive telemetry directly from the commercial launch operator. SpaceX, by far the most frequent launcher, is currently integrated. The agency is working with other launch data providers such as Blue Origin to add them to the system. With the SDI, the FAA is able to help manage launches and provide real-time airspace support. 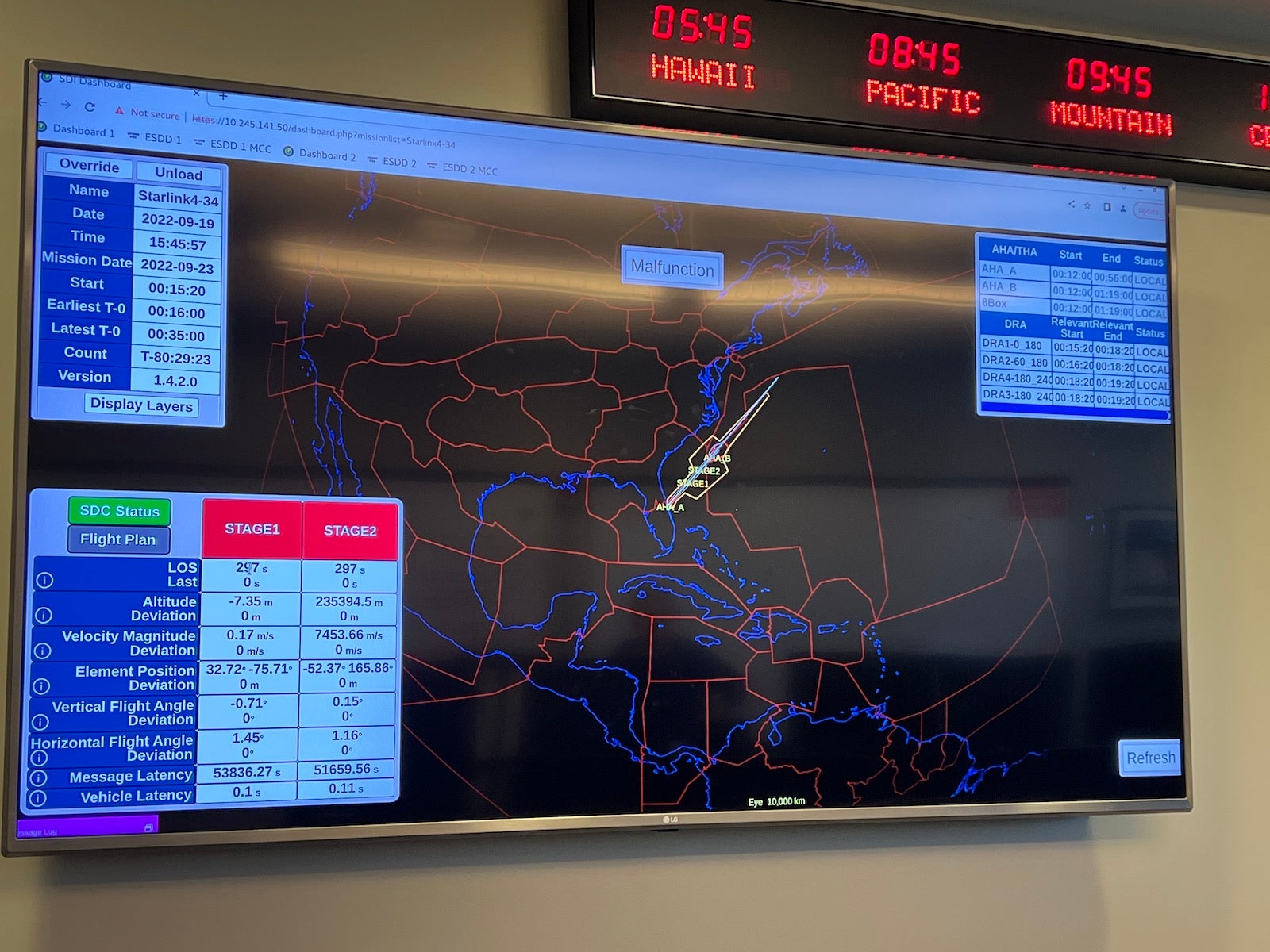 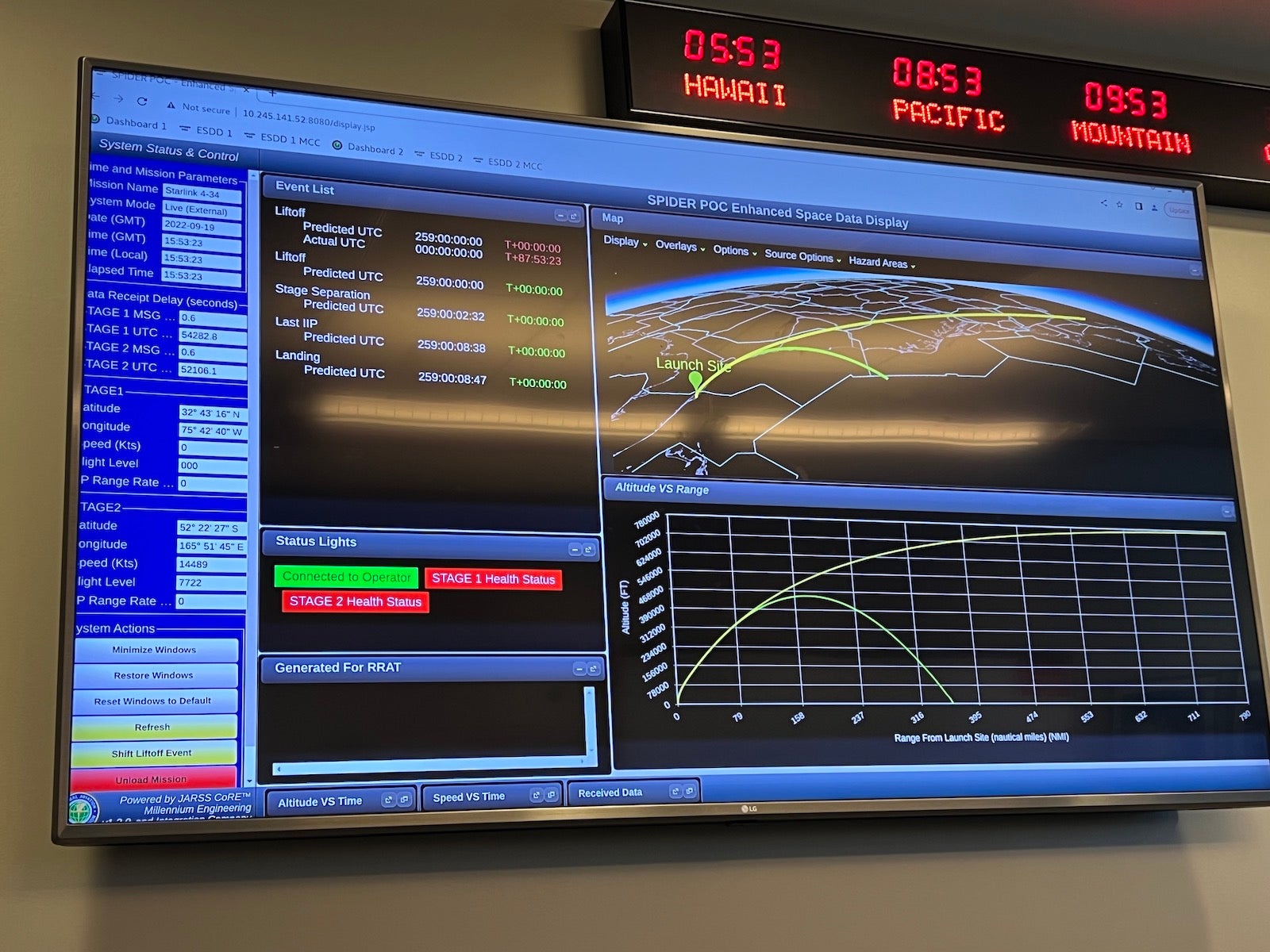 Previously, Freer said, the focus was just on safety, not efficiency. Before the FAA took on more of an active role, it would release airspace to the range — the U.S. Air Force — in blocks. Now, the FAA can actively manage the airspace video monitors from the Challenger Room and take a more precise approach to airspace closures without compromising safety. What used to be an hours-long process has, in some cases, been reduced to an airspace closure of as little as eight minutes: five minutes prior to launch and three minutes after.

Freer spoke specifically about how the agency has worked collaboratively with SpaceX and, given the many reliable launches of its Falcon 9 rocket, has safely shrunken some hazard areas associated with those launches.

Undoubtedly, the space operations group based in the Challenger Room will grow in importance — and see an increased workload — as the commercial launch industry continues to grow.

The FAA Command Center is focused on the big picture: Its purpose is to ensure that everyone knows everything that's going on and that facilities, airlines, the military and space launch providers are all communicating with each other. Without a command center, Dotterer said, the big picture would be hard to paint.

"If you were in LA, you'd have no clue what's been going on in Boston Center," he said.

To passengers, the command center might be somewhat unpopular: The staff there generally determines how long your flight's "air traffic control" delay will be. However, without it, the NAS would be a chaotic place. With today's traffic and complexity, a command-center-less NAS would be one that hardly functions.